But at Highland Park Elementary in Stillwater, a gaggle of them are in Summer Morris’ kindergarten class as part of the district’s Summer Academy program. The lesson is simple: Follow directions and work at a similar pace to your classmates while drawing a picture.

“Stay with me,” Morris tells the students. “Don’t try to get ahead of me.”

It’s the kind of thing these students would be working on in early fall during a normal school year. But last fall was anything but normal for these kindergarten students.

Stillwater Public Schools – like practically every district in the country – struggled to stay open and was cautious when it came to coming back to in-person learning. That meant it was time to expand offerings with the Summer Academy.

And the strategy, Morris said, is simple.

Stillwater has opened up its Summer Academy to each grade level and is hosting students at multiple sites. That’s led to more than a tripling in enrollment among elementary students, said Arryn Small, an administrator for Stillwater’s Summer Academy elementary programs.

In a normal year third graders are the youngest students in summer school. This year, students who were really struggling were asked to come to summer school. But any student could take part.

“So any of those parents that felt like my kid had just really missed a lot this year and I really want to get them to where they need to be before next school year starts, they got to come too,” Small said.

The curriculum is different. There’s a lot of reinforcement and review of topics that might have been covered during a time of distance learning over the previous school year.

Teachers are relying on assessments in topics like math – where Small said students are struggling particularly – to shape the summer curriculum.

“We’ve shared data with our teachers to let them know where those gaps are so that the teachers here at Summer Academy can meet the students’ needs exactly where they are and see what gaps they need to fill,” she said.

Credit recovery is still the main goal at the secondary level. But, many more students need to recover credits after failing a class. So there’s a doubling in students participating and programs have moved to Stillwater High and Middle Schools instead of being held at the alternative school.

Additionally, classes that would normally be offered online aren’t this year. 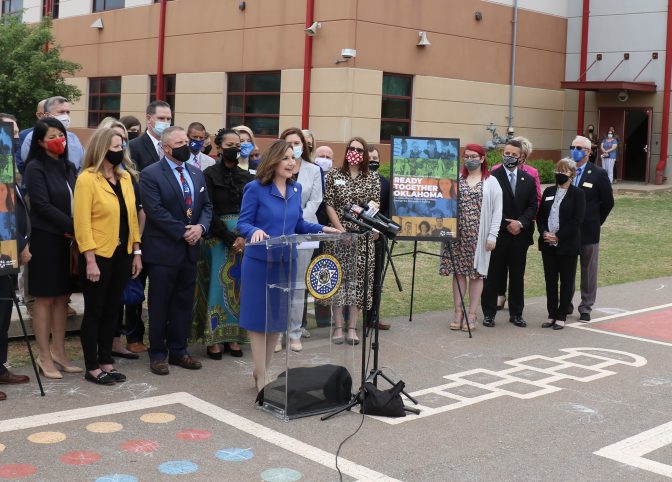 State schools superintendent Joy Hofmeister addresses the media at an event announcing the state’s summer initiatives in May.

Oklahoma’s State Department of Education is unsure of how many students are taking part in summer programming. But there has definitely been an increase and emphasis on recovery here and nationally.

State Superintendent Joy Hofmeister has pushed for summer programs. The state has vowed to invest $14 million into them.

“And so our kickoff and our real hefty boost is to try to make the most of this summer with strong strategic planning for the fall and into the next,” she said.

The need is greater than ever, she said.

“We arguably face the greatest challenge in education in modern history,” Hofmeister said. “And that is, how do we ensure that our kids will rebound from the pandemic stronger than ever?”

That question can be answered in a variety of ways.

Tulsa Public Schools, for example, has about 10,000 students enrolled in its summer program, compared to only 5,000 in summer 2019.

National observers have praised Tulsa’s approach, which includes a month of programming in July where every student in the district can go to their school to recover from the lost year.

“We’ve committed, in an unprecedented way, to investing in our young people and doing that this summer in a way that we’ve not done before,” Johnson said.

It’s a commitment a number of other districts have made as well.

Though most Woodward students were in person for the school year, quarantines and isolations were common.

Summer plans will be run through the district’s Boomer Extreme afterschool program (the high school mascot is the Boomers).

It will include partnerships with the Woodward County Extension Office, High Plains Technology Center, and even local yoga instructors. The emphasis will be on fun activities. The goal is to re-socialize kids while throwing in a little education here and there. It will include field trips to places like the Science Museum of Oklahoma in OKC and a trip to Alabaster Caverns.

“Our students, our teachers, our parents, our community of all felt these pressure points both physically and emotionally during the last year,” he said. “Now is the time for healing.”

A flash in the pan or a new summer strategy?

It’s hard to say what future summers could look like in Stillwater and beyond.

Federal funding will be available for the next three summers as the American Rescue Plan and Cares Act funding won’t run out until 2023.

Both Small and Swanson – key leaders of Stillwater’s efforts – said they will reassess the effectiveness of the summer programming in the fall.

“I think this is something that city of Stillwater, the citizens, the parents that they’ve asked for,” Swanson said. “Especially coming out of covid, with missing so much school, it’s an opportunity for the kids.”