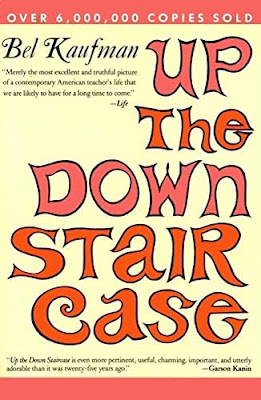 The tech is different, but not much else has changed since Up the Down Staircase. It was a series of absurd situations, with one pronounced tragedy. There was a teacher who lacked the sensitivity of a number 2 pencil. In the current system, that guy would likely be superintendent by now.

In the novel, teachers would say to one another, “Let it be your challenge,” or something whenever they were faced with absurd situations. Then they’d go their merry way and hope for the best.

These days, admin  still issues those challenges, telling you they’re serious but not impossible. The actual challenge is managing to view them as impossible but not serious. You can do that sometimes. It takes practice, and no supervisor can show you how. Many don’t know, and are supervisors simply because they couldn’t handle your incredibly stressful job.

Last week we had to submit report card grades. Because Skedula is out, and because the DOE imposed a system that does not actually work, I held off a long time from giving grades. I finally started using Google Classroom to record grades. Controlled by our administration, it has its drawbacks. For example, a new section of my class opened up and ten students were transferred. As soon as that happened, all their previous grades disappeared into the ether. One student was transferred from one section to another, and his grades have disappeared to. Hope his parents don’t come in and ask me about them today, our PT conference.

I did my grading last Sunday. We were sent an Excel sheet. I filled in everything and sent it back. On Monday, there was an announcement. Some grades were missing, and could we please fill them in online? ALL my grades were missing. I had to scramble to replace them.  I finished Tuesday morning, but by that time report cards had already been printed. So I did redundant paperwork for no reason whatsoever.

Then, of course, I had to lose class time while my students came up and asked why their grades were blank. I had to find their names on the Excel sheet (which thankfully I’d saved), handwrite grades (entering them a third time) and sign them one at a time. Of course, failing students were less inclined to ask. They got to go home and blame me for not giving them grades. I forwarded admin the email I originally sent with my grades, asking that they be posted for the next report.  Of course, they are Very Busy with Important Stuff and couldn’t respond.

We have a restorative justice program in our school. Someone is forcing the hapless teachers involved to write to us after MP2, asking that we pass these kids. Evidently some of my grades were captured. Here’s how I responded to one of them:

I
have seen this student exactly two days this year. The only other time I
heard from him was when he wrote, “Fuck this shitty class,” on my Google
Classroom wall. I deleted that message and muted him, and have not
heard from him since.

I
reported this action to admin, who did nothing about it. Or
perhaps they placed him in Restorative Circle. Who really knows about
these things?

Thank you for your inquiry.

I’m glad I don’t have to write teachers asking them how students who cut entire semesters can pass classes.

Then
there are the PDs we must sit through. Highly paid DOE people come and
tell you that all your ELLs, even the ones who don’t speak English at
all, MUST pass the English Regents exam. They don’t care how you do it,
as long as you do it now.

There
was one in which a principal told us to tell kids they must NOT be
LATE. FAIL them if they are late! He then segued into what we could do
to pass everyone no matter what. Ideas included sanctioned cheat sheets.
One teacher said he let his students correct the tests after they were
handed out, but only gave half credit for corrected answers. So a 50
becomes a 75. He’s now an assistant principal.

There
was one where a monolingual teacher lectured the language department on
how to be sensitive to multiculturalism. Evidently, the secret is to
give them a math project. Who knew? Like every other teacher in the
room, I’d lived and worked in foreign countries, studied multiple
languages, and acquired state certification in at least one. Why had I
frittered away my time like that when I could have simply assigned a
math project? Who knew?

Without
all that assistance, I have no idea how I’d manage to teach students,
34 at a time, with no background in English, how to use it. The secret
is to force them to pass the English Regents, fail them for coming late,
allow them to cheat on  tests, and give them a math project.

Then we get flowery emails
from various chancellors. They fight tooth and nail against reasonable
class sizes, force you to come in when there’s a deadly pandemic, and
withhold desperately needed funds from your school. Then they write
absurd missives from their air-conditioned offices and speak as though
they’re your colleagues.

It
takes a special sort of person to do this job, and a more special one
to keep it. Lots of people do it for one year, give up, and then write
books as though they are authorities. Actually, these people are
authorities on failure. Yet they pretend to have a magic secret to cure
all the ills of a system that hasn’t fundamentally changed in half a
century.

I
don’t have any magic secrets. But it wouldn’t be all that hard to
improve on the current system. In Spanish, they say that common sense is
the least common of all the senses.

How to grow up babies